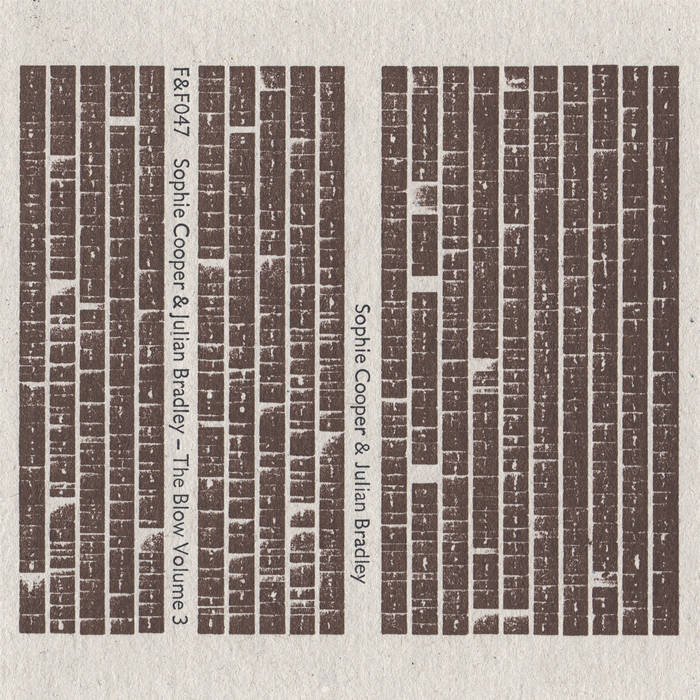 Front and Follow present the third in our series of split releases bringing together two of our favourite artists. Volume 3 features the wonderful Sophie Cooper and Julian Bradley.

‘The Blow’ project brings two artists together to formulate a collaborative release of their own making. Each artist has a side of audio to do whatever they want with. The two artists are encouraged to work together on the release, but the length and depth of this collaboration is completely up to them and agreed on a release-by-release basis – there are no set parameters, no fancy rules, no memorandum of understanding, no initiation ceremonies.

Each edition of The Blow comes on limited edition cassette with artwork by letterpress artist David Armes of Red Plate Press (redplatepress.tumblr.com), and download.

Bradley and Cooper approached creating their submission to ‘The Blow’ series with the cassette format very much in mind, collaborating fully on each track throughout the album by means of file sharing. The duo had the concept of weaving pieces together both in the sense of musically flowing the tracks into one another and by reintroducing motifs and imagery throughout the entire album. As such, the recordings are intended to be played as two distinct sides of a tape, rather than hearing the tracks individually on the digital version.

Julian Bradley is a founder member of Vibracathedral Orchestra, solo as The Piss Superstition, in Never Rad with Luke Poot, and a past member of The Negative Kite. His sound has been described as music that's eroded and smeared until its original content is obliquely hinted at or lost.

In collaboration with Sophie Cooper, a musician interested in reimagining the conventions of song writing through incorporation of drones, weird noises and alternative vocal approaches (and collaborator with Delphine Dora and United Bible Studies), the duo have created a series of pieces where fuzztone and feedback patterns pulsate, sweet vocal lines play with repetition and a sense of maximalism is achieved.

In 2016 Supernormal Festival commissioned Sophie Cooper to create a new duo work for performance and her first choice for collaborator was Julian Bradley. The commission was successful and Bradley / Cooper choose to continue the duo beyond this live performance, and are now a permanent collaboration under the name ‘The Slowest Lift’.